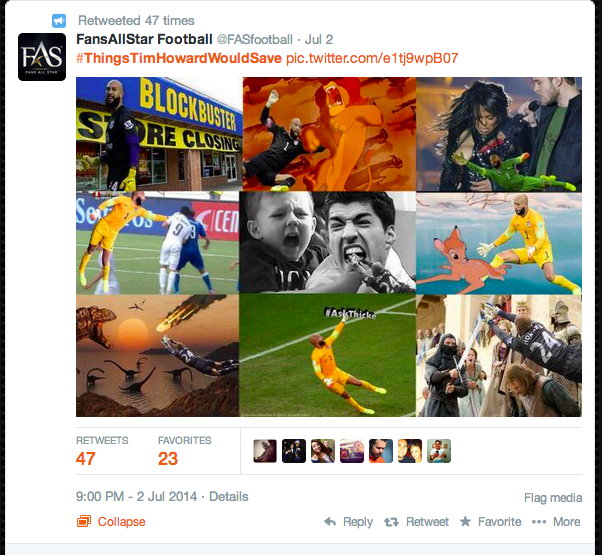 There is is nothing better than a fun or clever meme to make its way around the Internet. The FIFA World Cup has created a couple fun internet memes so far this summer. One was the Luis Suarez bite meme, but my favorite is #ThingsTimHowardWouldSave meme. During the tournament, USA goalie Tim Howard made some amazing saves. How he is did it sparked something in people. An internet meme was born.

A meme is typically a humorous image with a piece of text overlaid. It is copied by many and along the way people putting their own mark on the original. Then the meme spreads quickly over the Internet meaning your Facebook, Twitter, and/or Instagram feeds will be filled it. A good example would be the Grump Cat meme. Or the “I haz cheeseburger” meme.

So what makes a good meme?

It has to be timely and funny. It has to be compelling. It has to strike a cord with people like Luis Suarez biting another player or amazing saves by Tim Howard. A successful meme is not forced. It just happens. It fits whatever mood a group of people are feeling. And meme spreads without much effort and quickly.
The #ThingsTimHowardWouldSave meme is very funny. People are inserting photos of Tim Howard in difficult situations and having him saving the day using the hashtag. Some were cheeky while others were childlike.
Memes can be fun and serious. Memes can bring a smile across your face or make a point about an event or situation. But for the most part memes are just for a laugh.
What are your favorite memes past or present?
PS – I would love to know Tim Howard’s thoughts on #ThingsTimHowardWouldSave meme. It has to be a strange, but warm fuzzy feeling knowing that there is a meme based on you.