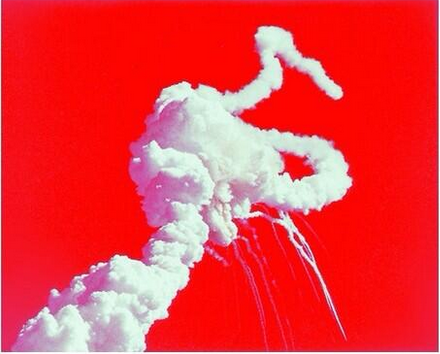 Typically I don’t like to play Monday Morning Quarterback; however, I’ve got to call American Apparel out on their Fourth of July post and then their apology. I’m calling it all rubbish. Plain and simple.
American Apparel does not have a stellar reputation with their style of advertising, which has been described as soft porn or exploitive of young women. Add to that the scandal ridden founder and now ex-CEO Dov Charney who is reported to have many claims of sexual harassment against him as well as other lawsuits. So when things on the reputation front aren’t going so well, it isn’t idea to add something else to it.
That’s what American Apparel did on Fourth of July. They reblogged on their Tumblr a stylized photograph of the 1986 Space Shuttle Challenger disaster created by UK-based designer Danny Norris with the tags of clouds and smoke. It caused outrage on the Internet, which crossed over into mainstream media. That’s never a good thing.
There is some debate that America Apparel did this on purpose. They are known for their outrageous advertising campaigns. I can’t say for sure and I doubt we will ever know.
If it was a mistake, two red flags go up the flag pole for me. One, it really shows sloppiness on their part. A simple Google image search, this photo will show up as the Challenger explosion even with the red background as seen below. It took me less than 30 seconds to research the photo making it easy to do in a realtime marketing situation. 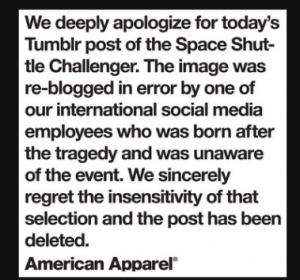 And two, it shows that no one is really managing the social media accounts based on their apology. It was left to an international social media worker. And they also blamed it on their age. (What an example of agism and a few other things.) Social media is just one channel of communication and should be included in an editorial calendar especially since the holiday of Fourth of July, as in most holidays, are predictable and greetings can be pre-scheduled. Meaning they should have had time to research and vet the posts before they go out.
Perhaps they were trying to be “respectable” and do a traditional Fourth of July greeting? If that was the case, they should have done something more along lines out of their usual playbook such as a what looks like an under-age female without much clothes holding a sparkler. But then again that may not have caused a stir like this did and deflect away for the reputation crushing issues they’ve had for the past month.
Either way, it is time for American Appeal to grow up and mature.