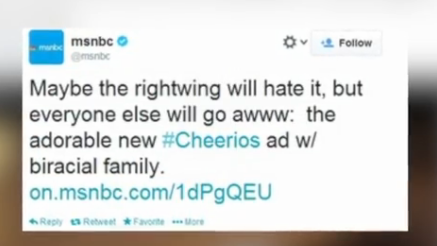 For the most part, not many errant tweets are posted to business accounts; however, when it does happen, it can be very embarrassing for a brand. The American cable news network, MSNBC, found themselves in a very awkward situation recently when a staff member handling their account sent out a very questionable tweet regarding conservatives not approving of the new Cheerios ad showing an interracial family with a link to a story on MSNBC’s website.
While that tweet got attention of a lot of people, it wasn’t really appropriate for a news organization since it was editorializing. And recently MSNBC’s reputation has been under fire for a string of controversial on-air comments in the last months of 2013, which could been seen as showing bias.

How an organization responds to an errant tweet is crucial. 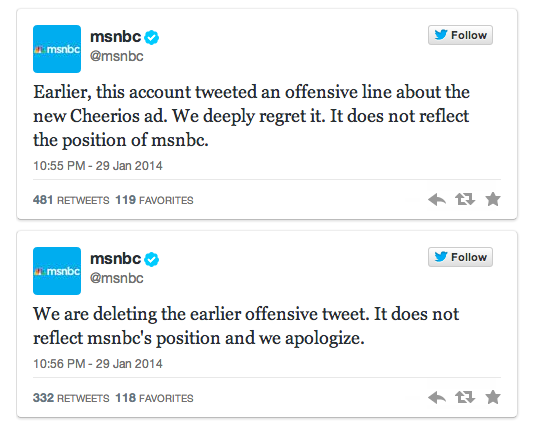 How to handle a controversial tweet can be done in a successful way. An organization can delete an offending tweet; however, it is a good idea to share an explanation. People will notice if the tweet has been deleted, and someone has likely taken a screenshot of it. So it isn’t like once it’s deleted, it’s gone. The footprint is there. Acknowledging the mistake in the proper tone goes a long way toward restoring faith in the brand.
MSNBC chose to delete the tweet and apologized. They made the correct social media choice. They responded quickly. They acknowledged the tweet then explained what their official position was and their next step was.
Organizations need to pay attention to what is being posted and by whom. This is when social media guidelines outlining standards for tweets is helpful.
Do you have guidelines in place to prevent misrepresentation of your brand on social media?

Social Media Crisis Communications: Preparing for, Preventing, and Surviving a Public Relations #Fail is now available in eBook format. Buy it now!
TIME CRUNCH? Are you putting your crisis communications plan together and need help? Or are currently dealing with a crisis and need crisis communications assistance? Get help NOW. Contact Ann Marie at ann@mindthegappr.com or +1 302.563.0992 today.