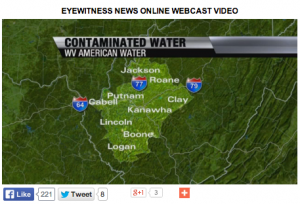 Around 7am people start smelling an odd smell as they started their day. It was out of place even for those living around a chemical plant.
At 10:30am, employees at the near-by chemical company discover one of the tanks is leaking. No one from the company has notified local officials of the leak.
By 11:05am, after receiving numerous calls from neighbors of the chemical plant inspectors of the state department of environmental protection arrive at the plant to investigate the smell. Officials have still not been notified of the leak.
At 12:05pm, the call to the spill hotline from the company to report the leak is made. In the meantime unknown quantities of a chemical has leaked into the river when the chemical plant is located on. The plant is upstream from a water treatment plant.
Within five hours of the call, an immediate ban on using water in surrounding communities of the chemical plant was ordered. The chemical planted ordered to cease operations straightaway.
The next day the president of company holds a brief press conference. Details were not forth coming and people were left with more questions than answers adding to community confusion and mounting fear regarding their safety.
Citizens, groups, and governmental agencies soon rail against the company. Probes and criminal investigations are mounted and lawsuits filed. The company continues to do very little to communicate.
The above is not a fictional example. In early January, a chemical plant near Charleston, West Virginia had a leak, which contaminated the water for over 300,000 people. Citizens were told not to use the water in any fashion. Numerous people fell ill with stomach ailments and rashes. It is estimated that 7,500 gallons of the industrial chemical 4-methylcyclohexane methanol, or known as MCHM, leaked from a one-inch hole breaching the containment wall and seeped into the Elk River. A health crisis unfolded. Communication is key. Getting the correct facts and instructions out to the public as efficient as possible is important.
Within crisis communications, there are four impact levels from Level 1 with minimal communications is required to Level 4 impact, which is considered a catastrophic event. A chemical spill is a Level 4 impact requiring immediate action. And it is a crisis where communications is essential.
A crisis communications plan is part of an organization’s risk management plan. During a crisis, an organization will not have time figure out how to communicate with staff and public conveying important information.

What is essential for a crisis communications plan?

There are five elements fundamental to a solid plan:
People: You need to have a well-trained crisis response team made up of business-critical people. These are people who understand the situation at hand and they need to be media trained.
Monitoring. An organization has to be listening at all times. Because of the speed of social media and how fast a crisis could evolve, it’s mandatory that monitoring systems be in place. That “golden” hour has been cut in half.
Scenarios. In order to be fully prepared for a crisis, you need to be aware of possible scenarios facing your organization. You need to understand your organization’s strengths and weaknesses, as well as the threats to it.
Statements. Having holding statements developed around scenarios will buy you the time you need when a crisis is breaking. Holding statements will bridge the gap between when the initial crisis breaks and when you get more concrete information on the situation. Statements should be prepared for all channels including social media platforms and be preapproved by executives and legal before a crisis strikes.
Notification. Getting information out during a crisis is important. Notification systems are necessary to disseminate correct information quickly to both internal and external audiences. Websites, phone calls, SMS texts, emails, Twitter, Facebook, and traditional media are all acceptable channels, and a multichannel effort works best.
While most businesses will never face a crisis of the magnitude of a chemical spill, preparation is key for any crisis. Remember how you respond to a crisis many effect if your business survives or not.
This column was originally published in the Lexington Herald-Leader on Monday, January 27, 2014 and nationally distributed  to over 300 media outlets through the Tribune Content Agency.