Is the New Myspace a Waste of Space? 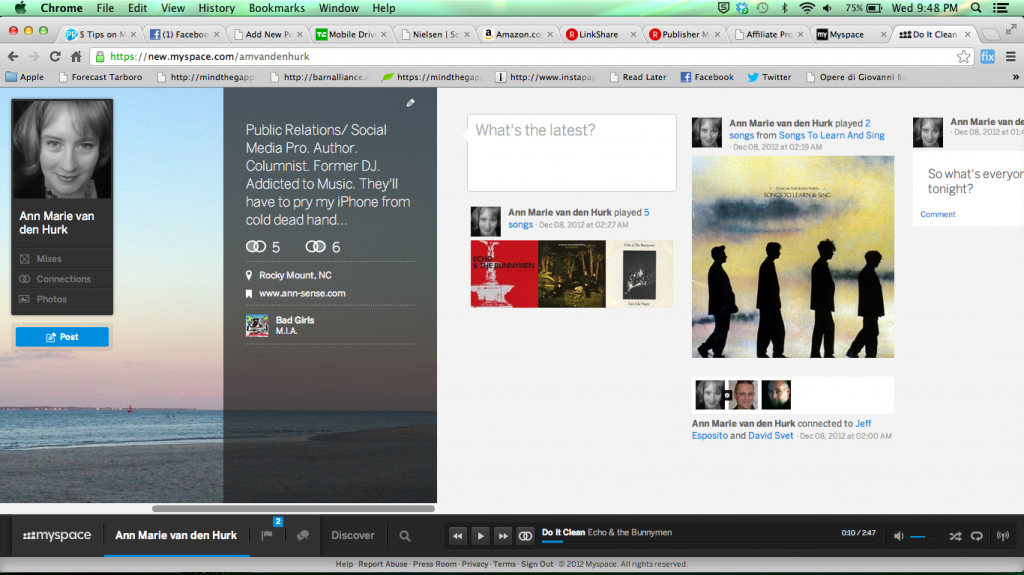 I’ll be honest with you. I was never a Myspace fan. I joined it back in 2007 on the urging of friends and I think I’m being generous saying I visited it a handful of times. In fact, I deleted by profile over a year ago because I never visited the site. It did nothing for me so much so I couldn’t tell you anything about it other than I found it rather creepy. Outside of LinkedIn which I had joined early on for professional reasons, Myspace was my first entry into a truly social-focused platform.

Myspace has been around since 2003 and has gone through couple of owners including Rupert Murdoch’s News Corporation and now is owned by music star Justin Timberlake. Under Timberlake, the declining platform was recently relaunched in September 2012.

The New Myspace isn’t Facebook. And I don’t think that is its aim. It is a niche platform focusing on people who make music/movies/photography and those who consume it. (Emphasis is on music.) It is a virtual artist community and listening station. It is works for that.

So when a colleague, Todd van Hoosear, half technologist and half communicator, who is principal at Fresh Grounds, shared he had some invites to the New Myspace, I couldn’t resist. Like I needed another social media network to be involved in is like I need a hole in my head.

I jumped on it anyway and I’ve been on the New Myspace since November. I’m not a power user by any means, but I try to stop in there at least once or twice a week. The interface is clean and stylish. Much nicer than I remember the “orignal” Myspace. It did take me sometime to get use to the moving around the site. I’m a music lover so the idea of being able to convey my feelings or thoughts in a post by sharing a song is a good thing and being able to potentially interact with my favorite artists is a plus.

The negatives, however, for me right now are biggies. There isn’t a whole lot of interact going on yet. Just a lot of broadcasting. The community hasn’t really developed yet, but that takes time. I want interaction that’s why I’m on social networking so to actually interact with people. And the deal breaker for me is there isn’t a mobile app. I need to be physically at a computer to use Myspace. I spend a good bit of my time on my iPhone and that’s where I’m most likely to jump on the social sites. To me, my laptop and desktop equals work. Also, I’m thinking about the demographic, which would make this a hot platform and it isn’t a 40 something Mom (though we’re pretty darn hip and cool cause the kids have to get it from somewhere, right?), it is the teenager or young adult. Tumblr is ruling that demo due to the flexibility and mobility.

Bottom-line: is the New Myspace a waste of space? Depends what your goals and interests are. If you are in the music business or wish to connect with folks in the music business, then Myspace is a good investment on time. The same goes for you if you’re a music lover and want to explore new tunes as well as connect with the artists directly, then Myspace is a good place to do so.
I know I’ve said this before, but I’ll keep saying it: a social network has to give the users something. Something they care about. Something they don’t want to miss out on.
A friend shared that after the horrific school shooting in CT in December, how he retreated to Myspace needing to escape from the news and the shouting on Twitter and Facebook. And I admit I retreated to Myspace that Friday night after the shooting for a little bit and then allowed music engulf me.
Right there a social platform provided true value.