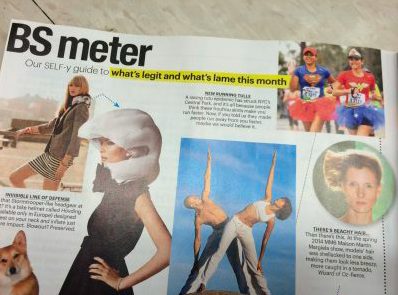 Self Magazine learned a hard lesson recently on how to alienate and anger two vocal communities when they chose to include a young woman who is fighting brain cancer running a road race wearing a tutu in their section called BS Meter, which is billed as “Your self-y guide to what’s legit and what’s lame this month.” They were mocking the fact that runners are wearing tutus during races. Self had contacted the young woman to use the photo and didn’t tell her what they were using it for. She was thrilled that Self wanted to run her photo and was hurt to find out they were mocking her and others running in tutus. Turns out the young woman had started the company, Glam Runner, which makes tutus and has donated over $5500 the nonprofit running program for young girls, Girls on the Run.

Self Magazine really stepped in it with runner and cancer fighters/survivors both of which are very passionate and highly organized communities. The reaction to Self Magazine was shift on social media. The velocity change in a 24 hour period was in four digit percentage change and it was negative towards Self Magazine. Community outrage was great. And they underestimated the impact a small mention and a photo would cause.

Social media is a perfect tool for outrage exasperation. It is a better tool than any other channels for spreading outrage. People are more linked. The cost of access is very low. Before social media, people who were angry at an organization or a situation had limited options. They could just shrug it off and throw up their hands. They could tell their friends about their experience. They could conduct a one-on-one battle with the organization via letters or phone calls. Or they could try to get people outside their sphere of influence interested by writing a letter to the editor that might or might not be printed. There was really no way of knowing who agreed with these people or of connecting with these outraged folks, even if they lived in the same location. It was very difficult to start a movement.

Social media isn’t a level playing field when it comes to outrage. It favors those who want to spread outrage, not those trying to mitigate it. We’ve created an institution that makes it easier to spread the outrage than to suppress it. It doesn’t matter if the outrage is justified; that’s irrelevant. Organizations must deal with outrage immediately. Before social media, it was hard for outraged people to organize, and it was easy for organizations to ignore them. Social media has changed that.

Organizations are slowly getting more sensitive to outrage and are putting a higher priority on dealing with it. The editor of Self Magazine did a personal apology to the young woman soon after the community outrage began. Her apology was not well received by the community.

Many are threatening canceling their subscriptions and encouraging others to do the same. This should be a concern for Self Magazine. Unlike with the infamous social media crisis “Motrin Moms” situation where in 2008, Motrin launched new ads with the tagline “We feel your pain.” One of the ads implied that it was a fashion statement to carry your baby in a sling and that was the main reason women do it. It offended some people, and they used Twitter and blogs to voice their complaints. Motrin eventually apologized and pulled the ads. While there was great outrage within certain vocal communities,it was a short-lived, temporary dent in Motrin’s reputations and may have caused some not to purchase Motrin again. On the whole, though, the brand wasn’t affected. People didn’t stop buying the pain-reliever en masse. Operations weren’t affected. Their market shares didn’t drop. People can’t do without their favorite pain-reliever, but they can do without a magazine. The marketplace is cluttered with many health-focused publications.

Social media is teaching organizations to take outrage seriously. Social media is giving activists a powerful channel to express themselves. And be heard.

Is your organization prepared to recognize and effectively manage community outrage?