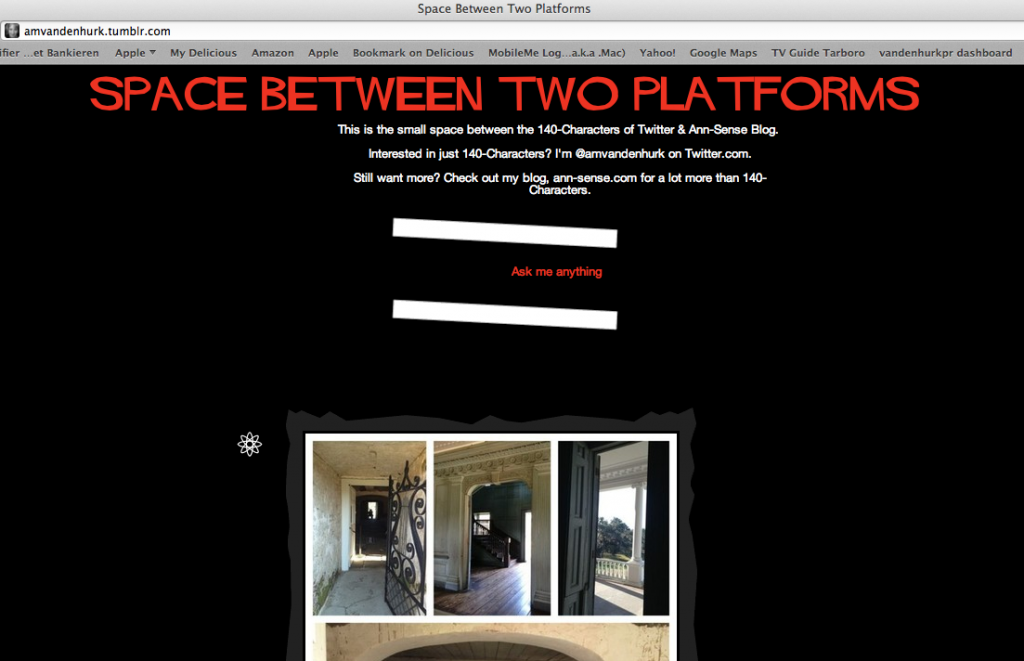 I felt like I needed to revisit Tumblr. It has been two years since I first wrote about it. Tumblr has grown quite a bit to over 80 million blogs. Like with every platform, it has experienced some growing pains such as outages and an infectious worm that comes when embraced widely.  In 2012, Tumblr made the jump into paid advertising with an ad campaign for the super brand, Adidas, in time for the 2012 UEFA European Championship. They seems to be maturing nicely. And honestly without much of the drama other platforms are experiencing… what comes to mind right now is Instagram.

So when I read the article in Social Times about more teens are on Tumblr than Facebook or Instagram, I wasn’t too surprised by it. It makes sense that teens would be using Tumblr more. No brainer.
Why? Think usability, attitude, and mobility.  I’m a user of the platform. I use Tumblr as in-between space between the 140-characters of Twitter and this blog, Ann-Sense. It is where I can expand on thoughts which don’t really fit in this blog, but I feel like I want to share publicly. Tumblr is a place for me to just be… not think about who is following me, who I’m following, or if anyone reblogs or repsonds to anything I’ve posted. No pressure or social angst.  When was the last time you heard someone lament that so-and-so isn’t following them on Tumblr? Never, right? What keeps me coming back is the flexibility Tumblr offers by allowing me the ability post text, video, music, and photos… all through their mobile app. The mobile app makes it for me since I spend a lot of time on mobile. Just fits my lifestyle.
A social network has to provide value to its users. It doesn’t matter what the social network is, it has to work for the users and provide them with a meaningful outlet to share and connect on their own terms. Tumblr fits the bill for many including brands and organizations.
—–
For those of you subscribing via RSS, I need your help. In order to continue to get this blog by RSS, please update your feed settings to: http://feeds.feedblitz.com/mindthegappublicrelationsllcann-senseblog
—–
Ann Marie van den Hurk, APR, is an accredited public relations professional with over a decade experience bridging the gap between traditional public relations and emerging technologies. Need help reaching your business’s customers, call 302.563.992 to schedule an initial consultation, or contact Mind The Gap Public Relations.