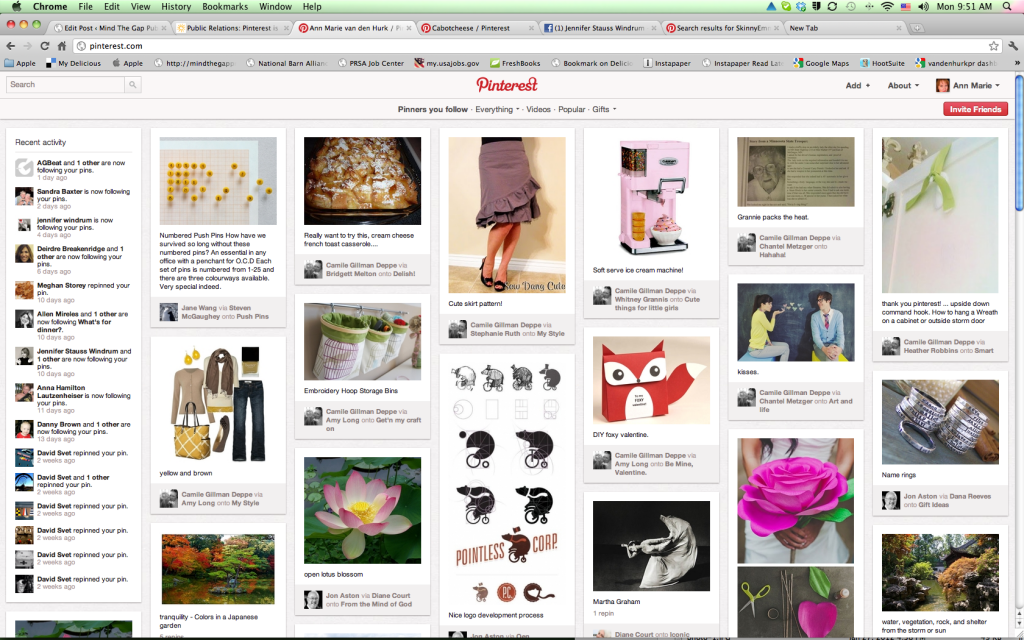 Pin it. Repin it.
What’s old has become new again, as the popular pinboards of yesteryear have evolved into an emerging social network called Pinterest. The site is gaining fans who are addicted to the visually engaging and fun platform that can also be used by businesses to reach out to their customer bases.
Pinterest is a virtual pinboard. Think of the old-school corkboard where people would post interesting photos, articles, flyers using pushpins. This is just the digital version of it. Users can create boards around different themes or topics and then pin images to those boards.
Other users can follow boards, comment on pinned images or re-pin (share) them to their own boards. A user can invite others to his or her board, allowing the person to pin on it. The pins can also have embedded links to the originating sites and can be shared to Facebook or Twitter. Pinterest allows you to easily sort through large amounts of information visually and presents it in a meaningful way that can be easily shared with others.
So how can this rapidly growing social network fit into your business? Lexington’s Emily Sandford, a weight loss and fitness blogger at SkinnyEmmie, has used Pinterest to drive traffic to her site. Her goal on Pinterest was to share stories, and since photos are such a strong piece of storytelling, she’s found people like to click through to view the content behind the image. The people she’s connected with are learning to trust her content and are more likely to repin it as they become more familiar with her.
So far, Sandford said she has found that 77 percent of people coming to her Website from Pinterest are new visitors. Visitors from Pinterest stay on her blog 35 percent longer than people visiting from other sources, according to her site’s analytics data. Pinterest visitors also view 10 percent more pages each time they visit the site compared to others. 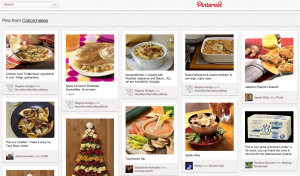 Large brands are also beginning to embrace Pinterest, which remains in beta and requires an invitation to join. Liz Scherer, a social media analyst and a former consultant for companies such as Cabot Creamery, has adapted Pinterest into media campaigns. She saw it as a way to bring traffic to Cabot’s Website and also increase interaction with customers.
In the case of Cabot, the team of which she was once part, created a Cabot cheese board that offered recipes and other tips. In turn, consumers have been invited to share their Cabot cheese recipes on the board, too. It’s been a success as the company has allowed consumers to take hold of the board and help make it their own.
Because of the site’s visual nature, Pinterest is ideal, Scherer said, for food brands like Cabot’s as well as fashion retailers, dietitians and restaurants.

Pinterest isn’t just fluffy, said Jennifer Stauss Windrum, a public relations and social media strategist. Windrum has used the site for a non-profit she founded called “WTF?” (Where’s the Funding) for Lung Cancer? Among the uses has been developing a line of sock monkeys called SMAC! (Sock Monkeys Against Cancer). She pinned various attributes of the sock monkeys she wanted to design and interacted with others to create them all virtually.
Windrum also has used Pinterest to build a powerful visual community through her “Faces of Lung Cancer” board that shows the disease affects people of a variety of ages and backgrounds. Windrum said she’s found it’s a powerful storytelling tool and a good way for nonprofits to get their messages out while getting people to talk about their cause.
But Pinterest isn’t for every business. Like with every new opportunity, Scherer said businesses need to make sure it fits with their business goals and have a plan in place to ensure effective management.
Companies also shouldn’t shove messages or sell non-stop. Success on Pinterest comes down to being respectful of the users and mindful to what your business is posting. Since Pinterest is still a very niche and growing platform, there is little tolerance among its users for people who only use the service to be promotional, Lexington’s Sandford said.
Businesses should also look at what people are repining and why. Like with every new social media site, it’s an evolving process to see how useful it is to visitors. Take your lead from users.
This was originally published in the Lexington Herald-Leader on Monday, January 30, 2012.