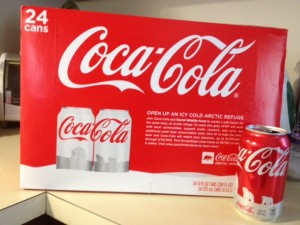 I appreciate my peers who make me think. Even after that fact. Often days later. Geoff Livingston posted on his Facebook wall a question as to which campaign did folks like more Coke’s Arctic Home or Pepsi Refresh. I gave a flippant answer, but this morning as I was putting a 12-pack of Coke in the fridge, Geoff’s question popped back in my mind. Now I have to be upfront here, we’re die-hard Coca-Cola drinkers in this house and having moved to the region where Pepsi was created is hard to swallow. That being said as a public relations professional, I pay attention to what all brands are doing including Pepsi.
Both companies should be commended for raising awareness and raising funds for worthy causes. With their vast marketing machines, their reach is undeniable and their ability to influence the masses for the betterment of our global community is unmatched.
My question is which of the campaigns fit better with the brands? I have to say Coca Cola’s Arctic Home. The polar bear has been featured in Coca Cola advertising since the 1920s and became a central part of their advertising in the 1990s.  It makes sense to me that Coca Cola would partner with an organization such as the World Wildlife Fund to help protect polar bears. It was a very focused campaign. On the other hand, I don’t quite see the connection with Pepsi and the Refresh campaign. It doesn’t jump out at me and stay with me. I found the campaign disjointed and confusing. What was the focus of the campaign? The mission wasn’t clear.
When entering into any cause-related marketing campaign, it has to be a good fit for both the brand and the cause.  It just has to make sense. And be memorable for the consumer. It needs to keep with the mission. Period.
Ann Marie van den Hurk, APR, is an accredited public relations professional with over a decade experience bridging the gap between traditional public relations and emerging technologies. Need help reaching your business’s customers, call 302.563.0992 to schedule an initial consultation, or contact Mind The Gap Public Relations.