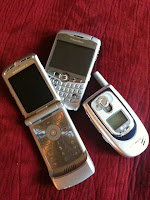 Reaching customers in an effective and cost-efficient way is the goal of all businesses. And after that sentence, there would still be 72 characters left in a marketing message by Mike Monson, who operates a franchised Sub Station II sandwich shop in Fort Wright in Northern Kentucky.
You see, Monson is one of a growing number of business owners who have turned to text-message marketing to help grow their customer base and lower their marketing costs.
Monson has been sending out text messages with coupons or specials, and has seen a redemption rate of 50 percent on those texted coupons compared to just 0.5 percent on traditional direct mail coupons.
“I often send it out before lunch or dinner when customers are thinking about what they are going to eat,” he said, adding the text messaging service prices out 75 percent lower than direct mail.
He said he found his customers look forward to receiving their text messages, and he’s finding more and more of those customers interested in signing up for his service as texting has become the norm.
According to a recent Pew Internet survey, 85 percent of U.S. adults and 75 percent of teens carry a cell phone and 28 percent of those are smartphones, which offer handy features like navigating customers right to your business’ front door.
At an average of just 4 minutes, text messages are prone to be opened more quickly than e-mails. They’re also less likely to be deleted off phones as quickly as e-mails are trashed.
Other advantages of SMS-text message marketing over traditional channels include:
■ Relatively low costs to create and maintain a campaign
■ Allows customers to sign up for the campaign anywhere at anytime via just a text message
■ Reaches many recipients in a very short period of time
■ Can use GPS to target people only in a certain area
■ Shorter time needed to prepare a campaign
Conrad Carney, CEO of the Lexington-based but internationally focused CMSText, said his clients, which include large corporations, small businesses, medical providers and trade associations, have seen the same results as Monson. A client may send out a message to a thousand subscribers for about $120 monthly, he said. For every dollar they spend, their return is $37 to $72.
And as Carney’s client base proves, text-message marketing isn’t just for restaurants or other bricks-and-mortar retailers.
Charities are using text messaging to solicit donations. A solid example is the response to the earthquake in Haiti in January in which the Red Cross raised more than $10 million in the week afterward.
Locally, Keeneland Thoroughbred Racing and Sales is using text messages to provide patrons with links to betting sheets and alert them when dining room tables are available, said Bill Powell of Inbox Orange, which offers text-message marketing services.
In addition to broadening the scope of businesses using the services, Carney said he also sees the following trends growing:
■ Location-based marketing in which a company could let you know if a nearby restaurant has gotten in a favored specialty food
■ More barcodes within messaging to allow you to make purchases or have them scanned as coupons. Starbucks has been testing just such an approach with its Starbucks Mobile Card app on the iPhone.
■ Protection of mobile phone privacy will become a larger concern. He said businesses should build their permission-based lists now before more regulations are potentially put in place.
“Businesses will eventually have to use this so they have to pick if they want to be an early adapter or follower of their competition,” Carney said.
This was originally published on Monday, November 29, 2010 in the Lexington Herald-Leader.—-
Ann Marie van den Hurk, APR, is an accredited public relations professional with over a decade experience bridging the gap between traditional public relations and emerging technologies. Need help reaching your business’s customers, call 302.563.992 to schedule an initial consultation, or contact Mind The Gap Public Relations.